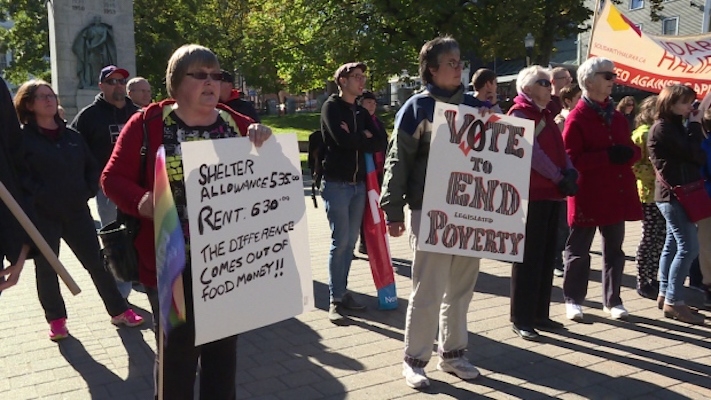 This column originally appeared in the Halifax Examiner April 16, 2018.

Traditionally, the do-good organization has been best known for turning your $5.4 million in yearly giving into a gamut of good grants to an alphabet soup of good-doing local organizations — from the Adsum Association for Women & Children to the Youth Voices of Nova Scotia Society — in order “to fight poverty and improve the health of our community.”

It’s all essential and useful work, of course, but it is also a bit like slapping a band-aid on the heaving chest wound of social inequality.

So, to its credit, the United Way has also recently begun to wade more and more deeply into the treacherous waters of political advocacy, promoting potential solutions rather than simply trying to mask poverty.

In 2015, in fact, our local United Way teamed up with the Canadian Centre for Policy Alternatives to produce “Working for a Living, Not Living for Work,” a meticulously documented 62-page report that advocated for governments to adopt living wage policies. At the time, the idea of a living wage — a wage based on “what it actually costs to live and raise a family in a specific community” — was only beginning to gain mainstream traction in progressive pockets of North America.

None of those progressive pockets, needless to say, were in Nova Scotia.

For its troubles, the United Way ended up in the crosshairs of that small-minded small business advocacy group, the Canadian Federation of Independent Business, which name-called the United Way itself as a “left-wing advocacy group,” and advised its members to “rethink” their financial support for the organization. Two weeks ago, the McNeil government performed its annual April Fool’s Day ritual of raising the minimum wage by another few pennies while maintaining our dubious distinction as the province with the country’s second-lowest, can’t-live-on-this minimum wage. When asked about the idea of a $15-minimum wage, now being seriously discussed in other provinces, McNeil dismissed it with a fact-free rant about how a higher minimum wage would result in job losses or reduced hours for workers… and blah blah blah.

McNeil, of course, is still not yet even mouthing the phrase “living wage,” which would be about $10-an-hour more than his current legislated minimum.

But others here are still talking about it, and people are beginning to listen — and that’s at least partly a credit to the United Way’s efforts to keep the issue alive in the local public conversation.

Last April, the United Way teamed up with the then-recently elected (and at least slightly more progressive than its predecessor) Halifax City Council “to tackle the issue of poverty.” As they put it: “We set out with a bold vision: to create a poverty-free Halifax, filled with compassion and opportunity, where everyone lives a life with dignity.”

The 56-page report doesn’t simply catalogue the reasons why we need to end poverty — the equity, human rights, economic and public opinion cases — but it certainly outlines them. Or merely enumerate all the predictable poverty predictors — single parent and female-led families, and their children; youth in care; people with disabilities; racialized groups; recent immigrants; those in what the report alphabetizes and encompasses in the ever expanding LGBTQ2SIA+community; and people with mental illnesses or addictions — but it does that too.

According to the report, 58,830 Haligonians currently live in poverty. At 14.8 per cent of the population, that’s higher than the national average, though lower than the 17.2 per cent provincial poverty picture. But poverty, even within relatively well-to-do HRM, is concentrated: 33.6 per cent in North Dartmouth, 30.3 per cent in Fairview, 28.7 per cent in Spryfield.

The irony, the report points out, is that most of those who live in poverty are actually employed, but 28 per cent of them earn under $15 an hour, well below a living wage. And their poverty — are you listening, Mr. Premier? — costs the province between $1.5 and $2.2-billion a year.

Perhaps more important than all that statistical backfill and explanatory backstory, however, is the report’s call to arms: 129 “ideas for action” in seven theme areas.

Some are specific and designed to “address immediate needs:”

Other recommendations are more complex and far-reaching, including what the report calls “pathways to prosperity” — like completing a pilot study and advocating for full implementation of that undead idea of a living wage. Perhaps most significantly, the report includes a section devoted to the need for “systemic change.”

It’s all worth a careful read. But more than just a read. As the report itself notes:

“We will not solve homelessness if we do not address the systemic issues that lead to income insecurity. We will not raise people’s incomes and increase access to services and supports until we address issues of racism and colonialism. Poverty is not caused by one single issue, but rather is the result of a system that marginalizes people. The system needs to change.”

The question of course is what happens now. And next. Those are always the questions.