“A few, disgruntled and opportunistic journalists who have been the subject of editing for many years, long before CanWest came along, will no doubt continue to abuse the word “censorship” and thereby gain their 15 minutes of fame. It has been so successful for Stephen Kimber that now last week two journalists at the New York Times are claiming that the editing of their articles is “censorship”. I guess we no longer need editors, because they’re all just censors.”

I spent 15 fine, fun and fulfilling years as a weekly columnist with the Halifax Daily News. I could — and usually did — write about anything that struck my fancy from local politics to international affairs to more personal, often just-for-fun pieces. I reluctantly resigned as a columnist in January 2002.

The paper’s owner, CanWest Global of Winnipeg, had begun forcing all its journalists, including freelance opinion columnists like me, to toe the company line on issues ranging from the Mid-East conflict to who should be prime minister of Canada.

So I wrote a column criticizing what I saw as CanWest’s censorship of debate. The Daily News, under pressure from CanWest Corporate head office in Winnipeg, declined to run it, so I quit. Ironically, the column has since been published in the Globe and Mail, The Coast, the CBC website, Media Magazine and probably a few other places I don’t know about. Herewith, the offending column as well as a backgrounder on how and why it all came to be, excerpted from a chapter I wrote in Silenced: International Journalists Expose Media Censorship, edited by David Dadge (Prometheus Books, 2005).

I don’t want to suggest that everything I wrote in my columns was of the “shocked and appalled” variety. Here’s a sampling from the lighter side:

After the Aspers sold off their interest in the Halifax Daily News to the Transcontinental Group of Montreal, my column returned to the pages of the Daily News. In fact, I was writing two columns each week — “Kimber’s Nova Scotia” on Sundays, and a general interest column each Thursday — until Transcontinental decided to close the paper in February 2008.

This obituary is from an article I wrote about its demise for Journalism Ethics for the Global Citizen. 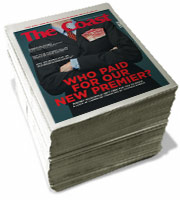 These days, I write a weekly column for Metro, Halifax’s free daily — and, ironically, the successor to the Daily News. I’m also Senior Features Writer for The Coast, a Halifax alternative weekly newspaper launched in 1993 by some ex-students. And a Contributing Editor to Atlantic Business Magazine, a regional business magazine.

Before I began writing books in earnest, I devoted most of my freelance attention to writing magazine articles. This one — about a retarded couple who’d been convicted of killing their daughter — appeared in Elm Street Magazine in October 1998. And here is a profile from 1982 of the legendary Maritime boxer, Yvon Durelle, who died in early 2007. It originally appeared in Atlantic Insight magazine. Speaking of dead celebrities, I went back into the archives to dust off this 1979 story I wrote for Today magazine about Denny Doherty, the Halifax-born member of the legendary pop group The Mamas and Papas. Doherty died January 19, 2007. Perhaps it is no coincidence that all three of those magazines are no longer publishing!

Did you know that Canada’s first newspaper was published in Halifax in 1752? Well, it was… but it wasn’t quite the momentous occasion you’d like for such historic milestones. This piece was commissioned by the National Library of Canada to mark the anniversary.