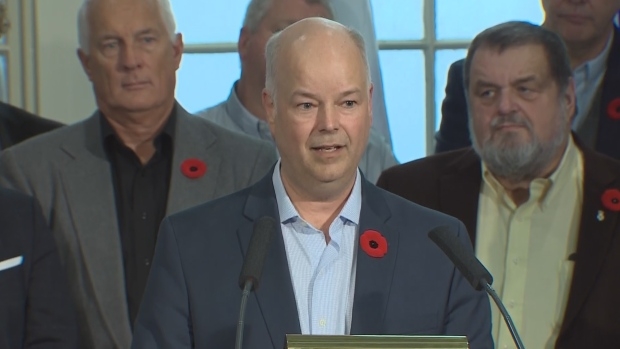 Jamie Baillie announces he’s stepping down… before the party demands his resignation. CBC

This column originally appeared in the Halifax Examiner January 29, 2018.

There is much to praise in the Nova Scotia’s Progressive Conservative party’s swift, decisive response last week to an allegation of sexual harassment against party leader Jamie Baillie. Especially in Nova Scotia with our tradition of look-the-other-way politics as usual, and boys will be boys, and on and on…

Twenty years ago,  even a highly publicized criminal case involving Gerald Regan, a former Liberal premier of the province accused of sexually assaulting more than three dozen women — many of them at the time young, low-level civil servants, secretaries and legislative aides — failed to change either the legislature’s lack-of rules of behaviour or the good-old-boys political culture that allowed such bad behaviour to flourish.

As recently as three years ago, when one of the current premier’s top aides pleaded guilty to domestic assault, the Liberal party — as Michelle Coffin, the woman who was the victim in the case, put it in an interview with the Globe and Mail last week— “sided with the individual who punched and kicked me…. [But] the Tories took a different position in that they protected the victim and removed Jamie Baillie from the position. I’d like to think that we can look at my case, and this case, and see the progress that has been made.”

She’s right, of course, but it’s also worth noting how limbo-low the bar for progress in Nova Scotia politics is.

And while the Conservative response represents progress of a sort, there are still lessons we can learn from what the party did — and didn’t do — in the Baillie case.

Let’s start with what we know so far about what actually happened.

That, in fact, is the first, and most important lesson for the party. We still don’t know all that we, as the public, have a right to know in order to fairly evaluate the party’s response — and what we do know so emerged has emerged only in reluctant stutter-steps from party spokespeople unwilling to be forthright.

The party should have been as transparent as possible as soon as possible.

The facts? According to Tara Miller, the president of the party, “multiple sources” told her in December about a single incident of “inappropriate behaviour” involving Baillie.

The person who was the alleged victim did not complain directly to the party about what happened. Neither did she file an official complaint under a House of Assembly policy on the Prevention and Resolution of Harassment in the Workplace that all parties had agreed to in 2016. Instead, she confided to others, who brought the incident to Miller’s attention, who then triggered the investigation.

That’s reasonable. While the House of Assembly harassment policy includes a reporting mechanism that normally begins with the person filing a complaint to the party’s caucus whip, you can understand why a victim might not feel comfortable complaining through such a process about a man who happens to be the most powerful person in the party.

The fact the alleged victim was unwilling to file her own complaint, however, doesn’t absolve the party of its responsibility, legally or ethically. If it came out later that the party had known about the incident and done nothing, there would have been political hell to pay. And rightly so.

So the party did the right thing. It created what it called its own “appropriate process” closely paralleling the official one: hiring an independent, experienced Halifax lawyer to undertake “the detailed analysis and review of the situation in order to provide the party and caucus with findings under the Nova Scotia House of Assembly harassment policy.”

According to the party, both Baillie and the woman participated in the process, and were each represented by legal counsel.

The lawyer’s report was delivered to the party last Tuesday (January 23, 2018). By Wednesday morning,  party president Miller and the caucus chair, Karla MacFarlane, had “requested and accepted the immediate resignation of Jamie Baillie.”

So who was the lawyer?

What did the lawyer discover? “The findings,” Miller said, “are a privileged report that will not be made publicly available, in order to protect the identity of the individual.”

So what then did Baillie, who’d been the public face of the party through two general elections, actually do to merit being fired from a job he was in the process of leaving anyway?

Was this the only complaint against him, or was this part of  a pattern of behaviour? (In the aftermath of the same-week resignations of Ontario PC party leader Patrick Brown and federal Liberal cabinet  minister Kent Hehr, there have been published reports suggesting both men had histories of harassing behaviour; I haven’t so far seen any suggestion that is true of Baillie.)

Again, however, the party’s lips are zipped.

We do know — not because the party said so, but because a reporter asked the police — that no one in the PC party filed a police report or asked for a criminal investigation. Should someone have?

The party’s vague description of the allegation against Baillie, “inappropriate behaviour,” can cover such a waterfront of actions — from one boorish comment after too many drinks at a Christmas party, to an ongoing history of demeaning comments, to sexual coercion, to worse — as to be meaningless.

While one can understand the party’s desire to protect the identity of the woman involved, especially since she didn’t make a formal complaint, that doesn’t absolve the party of its responsibility — to the process, and perhaps to Baillie himself — to provide a Cliff’s Notes version of what Baillie is alleged to have done so voters are in a better position to make our own judgments about what happened and the appropriateness of the response.

So while the PCs significantly raised the bar with their response to the Baillie allegations, there is still much that needs to be done — within all parties — to make such processes more transparent in the future.

The bad news is that this probably won’t be the last time time we’ll need them.

Stephen Kimber is the author of a 1999 book about the case of Gerald Regan, NOT GUILTY: The Trial of Gerald Regan, which is available through Amazon and used book dealers. An expanded, updated ebook version of the book under the title Aphrodisiac: Sex, Politics, Power and Gerald Regan is also available online.