Stephen Kimber > Freelance > Halifax Examiner > Can we trust the…

Can we trust the Armoyans to act in the public interest? No, that’s what council is for… 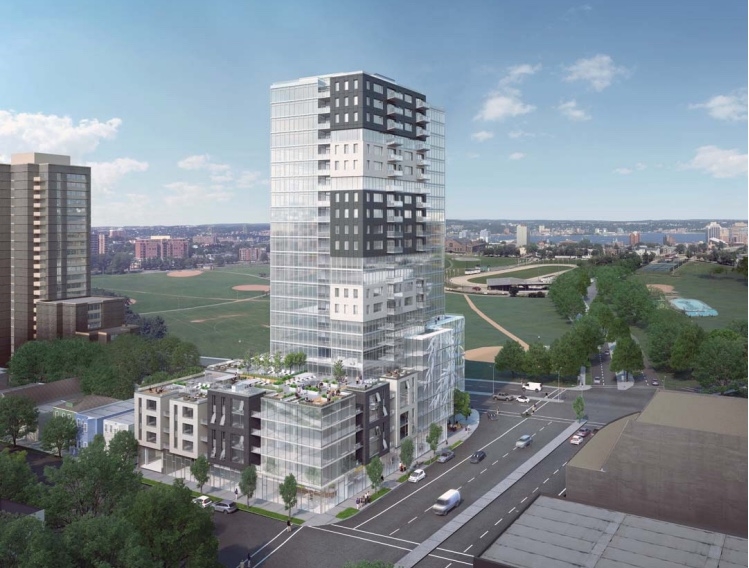 This column originally appeared in the Halifax Examiner January 22, 2018.

Last week’s lopsided Halifax city council decision to decide not to decide — for now — how to respond to APL Property’s proposal to erect a taller-than-OK 25-storey tower at the corner of Quinpool Road and Robie Streets was interesting for all sorts of reasons.

Before we wander into that thicket, however, a little history.

Back in 2014, APL — operated by Armco Capital, real estate developer George Armoyan’s family company — pitched a mixed commercial-residential high-rise for the site overlooking the Halifax Common. The property, which it had owned for 20 years, is currently home to an 11-storey office tower and a parking garage. At first, the company said it wanted to replace those structures with twin towers: one 22 storeys, the other 11.

Drawings flew back and forth between developer and city staff, proposals were exchanged, revised proposals proposed, and the developer eventually came up with a plan for a single 29-storey tower.

Our previous city council said yes, of course, thank you very much.

But the 2016 new council brooms — mindful of the reality city staff had opposed the project, which was nine storeys higher than the maximum allowable under in the city’s in-development Centre Plan — rescinded that yes, lopped the extra floors off APL’s proposal and sent a 20-storey version forward to a public hearing.

That was what citizens were supposed to discuss during a public hearing last Monday.

Twenty storeys would not only be too “understated” for the “landmark” location, the company argued, but it also wouldn’t allow APL a reasonable enough return on its investment.

In exchange for allowing it to add five more storeys to the structure, the company generously offered to sprinkle 10 units of affordable housing among its 200 or so pricier ones.

That wasn’t really a major concession. As Tim Bousquet put it in a next-day Morning File:

“The ‘affordable housing’ offer from APL is a joke. The offer is 10 units for a 15-year limit. Housing Nova Scotia hasn’t contracted for them, and doesn’t know what the proposal is about. The city can’t contract for public housing, so we’re left with this vague notion of a few below-market rental units for a few years. That’s nothing to base a development approval on.”

Councilors quickly leaped at the company-proffered lifeline and appeared to find much merit in APL’s 25-storeys.

David Hendsbee, who never met a downtown development he didn’t like, could have been reading from an APL script: “This site is one of the prime opportunities on the peninsula, and if not here, then where can we put a tall building?”

“If we don’t inject huge numbers of people into these areas,” Coun. Shawn Cleary chimed in, “we’re doing those neighbourhoods, and all services and businesses around them, a disservice.”

Despite the fact a clear majority of citizens who spoke at the public hearing opposed APL’s 25-storey pitch, Cleary introduced a motion to put off a decision until March so staff can come up with a report on APL’s 25-storey-for-10-public-housing-units offer.

One could be uncharitable and recall CBC’s March 2017 investigation into who paid for last year’s municipal election campaigns: “Developers, real estate companies and construction firms donated 17 per cent of all money raised by candidates during Halifax’s last municipal election,” the CBC reported. Its database, in fact, shows Armco spread close to $5,000 among the campaigns of current councilors Hendsbee, Mancini, Whitman, Walker and Streatch (though not, it should be noted, Cleary. But, as Tim points out, Cleary served as current APL spokesperson Joachim Stroink’s campaign co-chair during his 2013 run for the provincial legislature. Halifax is indeed a small political world.)

Since Halifax doesn’t have its own lobbyists registry, we don’t know who met with which councilors and officials— and what was said — in the lead up to last week’s council vote.

But here’s something we do know. The Armoyans have a long history of riding roughshod over both public authorities and the public — not to mention ignoring its own promises to both. I did a quick search of the electronic database of the old Halifax Daily News, which closely monitored the Armoyans early years in the development business.

Or consider the newspaper’s January 1996 greatest hits compilation of the company’s first decade in the local development business. It’s worth reading in full:

But can councilors trust them to put the citizens’ interests first? No. That isn’t their job. That’s the job of city council. It will be interesting to see if they’re ready for that challenge.