Does Cornwallis matter? More than I thought 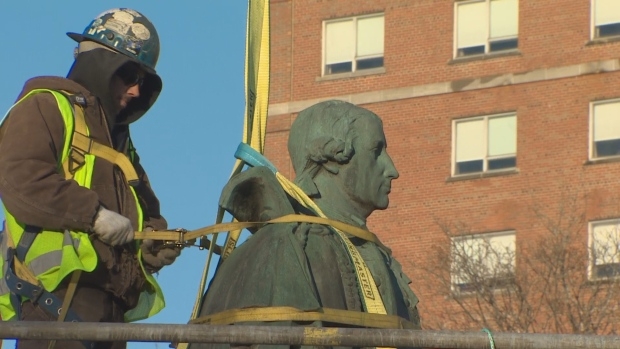 This column originally appeared in the Halifax Examiner February 5, 2018.

Count me among the countless Nova Scotians happy to see the back of Eddie Cornwallis’s scraggy, statue-head as it was ignominiously carted off last week to some dank, secret storage depot somewhere, out of sight and — hopefully — out of mind for at least a while.

My satisfaction, I confess, had less to do with my own ideological view of the Cornwallis controversy — I do believe at some point we need to come to uneasy terms with the complexities of the legacies, not only of Cornwallis, but also of virtually every other hero-of-the-era we choose to venerate before changing times change our views of them — and more to do with my own sense that Cornwallis had become a too convenient distraction/obsession for too many of us in the non-indigenous community.

It is far easier to rail against the misdeeds of a 242-years dead British general than to let our brains and our consciences smack up against the brutal reality of all the many and various injustices we continue to inflict on indigenous peoples: the lack of adequate water, health care, housing, jobs, opportunities in too many First Nations communities; the ongoing, never-ending legacy of residential schools; the ongoing, never-ending reality of missing and murdered indigenous women; the historic failures of governments to read, recognize and respect treaty obligations; our still stuttering steps toward truth and reconciliation…

When stacked against all those pressing contemporary issues, fretting over even the genocidal legacy of an historical nonentity like Edward Cornwallis, it seemed to me, was distracting us from more meaningful matters. 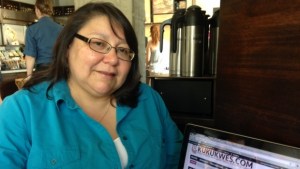 Maureen Googoo would disagree — not completely, but significantly.

Maureen, who is one of Atlantic Canada’s most experienced indigenous journalists, has both a longer term — and a more specific — view of the Edward Cornwallis controversy.

“A proud  Mi’kmaq” from Nova Scotia’s Indian Brook First Nation (Sipekne’katik Band), she grew up “in the shadow of the residential school that loomed over our community” (with all the baggage that carried). She is the first Mi’kmaw person to earn an undergraduate journalism degree, graduating from Ryerson University in 1994; the first indigenous reporter in the Halifax Chronicle Herald’s long history; and the first indigenous person from Canada to earn a Master’s degree in journalism, graduating from Columbia University in New York in 2007.

She’s spent more than 30 years — dating back to student summers working for the Micmac News — as a journalist, mostly in Atlantic Canada, most of that time focused on native issues, even when such stories were a hard sell with mainstream editors. Besides the Herald, she’s worked as a journalist with various CBC outlets and as the first Atlantic correspondent for the Aboriginal People’s Television Network.

Two-and-a-half years ago, Maureen launched Ku’ku’kwes News (pronounced “Goo-goo-gwes”), a largely reader-supported news website that is the only one in Atlantic Canada to focus exclusively on covering indigenous news in the region. And she’s currently — at the same time — writing a book about her experiences as an indigenous journalist covering the issues that matter to her community. 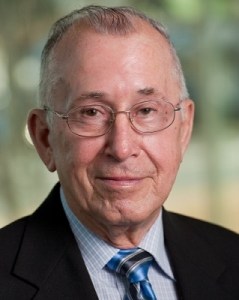 Maureen was still a student at Ryerson in 1993 when Mi’kmaq elder Daniel Paul published the first edition of We Were Not the Savages, documenting — with sources “supported by the written word of the white man” — not only the illegal British confiscation of Mi’kmaq territory but also the use of “scalping bounties” to encourage the genocide of her community.

She remembers Paul’s book “kicked up a lot of dirt in people’s faces” at the time, and that non-indigenous people, especially, were “not comfortable with what he wrote.”

But for Googoo herself — “a product of an education system where we learned a written history told to us by others” — Paul’s book became a revelation. And not just for her. “Today, there’s a whole generation of young Mi’kmaq people who’ve read and digested that book, and came to see the world differently. We began to look for our own answers, develop our own opinions.”

She remembers, for example, listening to a CBC radio interview not that long ago about the anniversary of the founding of a south shore Nova Scotia town and the casual way in which interviewer and interviewee spoke about the fact the new arrivals walked off their ships with “deeds” to their plots of land already in the heir hands. “They didn’t ask if there’d been any negotiation with the people already there, any agreement, any compensation… I was offended.”

That said, Maureen has seen an “awakening,” and not just among indigenous people. She recalls covering a meeting of the Truth and Reconciliation Commission in Halifax and listening, in fascination, as several white women in attendance “talked about how they were shocked and appalled by what they heard. ‘Why did we not know about all this?’ they wanted to know. They were angry with their own lack of education.”

There are lots of threads that have braided together to help change our conversation about indigenous issues — from the Marshall inquiry into Nova Scotia’s unequal justice system in the 1980s, to the Oka standoff in 1990, all the way through to the Truth and Reconciliation Commission’s court-ordered response to the tragedy of Canada’s residential school system in recent years — but, in Nova Scotia, she says, the Cornwallis controversy has played its own significant role.

“I remember talking to Dan Paul and him telling me about going screaming about Cornwallis to City Hall in the mid-nineties, and it went nowhere. Then last year, [indigenous writer and Halifax poet laureate] Rebecca Thomas reads a poem, and all of a sudden…”

As Tim Bousquet reported after last week’s Halifax council meeting, during which councillors overwhelmingly voted 12–4 to take down the Cornwallis statue:

“Steve Streatch is the stereotypical conservative, with both a big and a little C. He’s a climate change denier, ridicules bleeding heart liberals, etc. But he had a fall-off-the-horse moment last year when Poet Laureate Rebecca Thomas read her poem ‘Not Perfect’ before council. After Thomas read her poem, ‘I talked to that young lady, and I’ve come around,’ he said. He didn’t say exactly what he and Thomas discussed, but whatever it was, he came away understanding the hurt and pain of the indigenous community caused by the Cornwallis commemorations.”

He wasn’t the only councillor to have a change of heart. Councillor Bill Karsten, whom Tim writes has “built a reputation of sticking to his views, and rejecting, to the point of ridicule, opposing views, no matter how well-argued,” publicly conceded he would have previously opposed the idea of taking down the statue. But now…

I’m not embarrassed in the least to say where I am now is not where I was even a month ago… evolution of your position is what truth and reconciliation calls for you to do… we need a relationship with our Indigenous population based on trust and mutual respect.

“Times have changed,” agrees Maureen. “More people are more enlightened now, and Cornwallis was a flashpoint for that. For me, that is important.”

That said, she understands better than most of us the challenges indigenous communities still face. Her reporter’s resumé shows she’s covered most of the key episodes in the last 20 years at the intersection between indigenous rights and Canadian colonialism:

And she knows too that most of us haven’t thought nearly deeply enough about the meaning of  our own newfound truth and reconciliation mantras, like the rote recitations at the beginning of public meetings about the fact the event is taking place on un-ceded Mi’kmaw territory.

“Do you own property in Halifax?” she asks me. “What does that mean? Have you looked into the history of your deed. Was there ever any agreement, any compensation to the indigenous people who were there before you?… That’s why we call it un-ceded. Nothing was given up. Read the history.”

She says all of that not unkindly, but as a reminder that, as far as we have come, we have a long way to go. “For me, I can’t help but have flashes of frustration. But I also see change happening, and that gives me hope — and makes me emotional.”

I wanted to make — or should say remake — one more point before leaving Cornwallis to his dark room for the time being.

Tim said it best in his Morning File last Tuesday:

“The place for critical reflection and discussion of historical context is a museum, and that’s where the Cornwallis statue should go — not hidden away in a warehouse or disappeared forever, but put in a place where people can learn about the history of the Mi’kmaq, the Acadien and Mi’kmaq resistance to English colonization, the various battles and attacks around the Halifax area, the context and outcome of the scalp bounty, and the subsequent history of the these peoples. We have a lot of good history exhibits in local museums… But we don’t have a Nova Scotia History Museum — a single place where visitors can learn about the long and broad sweep of local history from pre-history through the Mi’kmaq centuries and on to the establishment of Halifax, the decades of military rule, Joe Howe and responsible government, Confederation, the wars, the Explosion, the VE Day riots, and so forth. A place where that history — including the social history, poll taxes and suffrage, the story of Gottingen Street and Africville, etc. — can be told in context by professional historians and archivists.”

As someone who is far from a professional historian but who has written a number of books about episodes from our province’s fascinating, often heroic, sometimes controversial, occasionally shameful but always-worth-learning-from history, I couldn’t agree more.

Now that council has taken down the Cornwallis statue, it should begin building that “proper history museum” where we, and visitors to our province, can understand, and learn from our past.