Stephen Kimber > Freelance > Halifax Examiner > Outraged about Russian meddling in the US election? What about…?

Outraged about Russian meddling in the US election? What about…? This column originally appeared in the Halifax Examiner July 23, 2018.

Americans are right to be outraged at the outrageous Russian interference in their 2016 presidential elections. They are correct to be appalled not only that their Putin-puttana-ed president continues to pretend that what happened didn’t happen, but also that their commander-in-chief and his principle-free, me-too Republican Congressional congregation refuse to act to prevent more and worse in 2018 and 2020.

And yet the US mainstream news media does their readers and viewers — not to mention the rest of us in a connected world swamped in the swamp of US cable news hegemony — a disservice by pretending the United States is somehow the wounded innocent in a new worldwide war for democracy.

The United States has been — and continues to be — the main global player in using whatever means necessary to disrupt, displace and (even if not necessary) replace foreign governments it doesn’t like.

Well, you get the unpretty picture. It continues.

In fact, the US has also even blatantly — and proudly — intervened in Russia’s electoral process. In 1996, Bill Clinton’s government took credit for altering the course of the Russian presidential election by supplying its own favoured-but-losing-in-public-opinion-polls candidate, then-president Boris Yeltsin, with “political consultants” and pressuring the International Monetary Fund to loan Russia $10-billion just four months before the vote.

Be careful what you plot for. And against.

Consider Cuba. The US has been considering — and been confounded by — Cuba for more than a century. Go back to 1898 when US armed forces invaded the island to intervene in Cuba’s war for independence against Spain, then passed the Platt Amendment soon after to give it unilateral authority to intervene in Cuban affairs in perpetuity.

Since the success of Fidel Castro’s 1959 revolution, the United States has never not been intervening in Cuban affairs. The Church committee investigation into CIA covert activities, for instance, documented “concrete evidence” of CIA involvement in at least eight different plots to assassinate Fidel Castro. The Cubans claim there were actually 638. (Regardless of which number you choose, it is undeniable the CIA has a history of favouring assassinations as weapons of clandestine war against other countries and their leaders: the Dominican Republic’s Rafael Trujillo, the Republic of Congo’s Patrice Lumumba, the Republic of Vietnam’s Ngo Din Diem… and on and on.)

Just as it still does in virtually every left-leaning country in the world, the US government continues to intervene in Cuban affairs today, if  in less lethal but no less targeted (and no more successful) ways.

Ever wonder where Russia’s troll factories got their inspiration and learned their tradecraft? Look no further than USAID, the United States Agency of International Development, a kinder, gentler CIA whose goal is also regime change,

Let’s look, for example, at just a few of USAID’s recent regime-change programs against Cuba.

In 2010, USAID covertly co-opted Cuban hip hop artists by recruiting them “for projects disguised as cultural initiatives but really aimed at… stoking a movement of fans to challenge the government.” And then there’s ZunZuneo, a USAID secretly created and funded “Cuban Twitter” social media scheme aimed at young Cubans. Its initial goal was to build a subscriber base by posting non-controversial messages about sports, music and weather updates. As soon as membership reached a critical mass, however, its American organizers had planned to “introduce political content aimed at inspiring Cubans to organize ‘smart mobs’ — mass gatherings called at a moment’s notice that might trigger a Cuban spring, or, as one USAID document put it, ‘renegotiate the balance of power between the state and society.’” 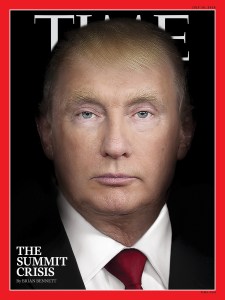 “We’ve been doing this kind of thing since the C.I.A. was created in 1947,” acknowledges Loch K. Johnson, a professor at the University of Georgia, who once served as a senior staff member to various US Senate intelligence committees. “We’ve used posters, pamphlets, mailers, banners — you name it,” he told the New York Times earlier this year. “We’ve planted false information in foreign newspapers. We’ve used what the British call ‘King George’s cavalry:’ suitcases of cash.”

In September 2016 — ironically just a few months before the Russians helped elect Donald Trump 45th president of the United States — a Carnegie Mellon scholar named Dov Levin published the results of a study showing that between 1946 and 2000, “the US and the Soviet Union/Russia have intervened in about one of every nine competitive national-level executive elections” in the world, targeting 60 different independent countries in the process.

A careful, precise academic, Levin defined “partisan electoral interventions” as ones that happened when one country “intentionally undertakes specific actions to influence an upcoming election in another sovereign country in an overt or covert manner which they believe will favour or hurt one of the sides contesting that election.”

Interestingly, 69 per cent (81) of the “interventions” Levin counted were actually undertaken by the United States against other countries; just 31 per cent (36) by the Soviets/Russia.(That number may underestimate the extent of Russian meddling because it is more difficult to find public information on Russian actions.)

While not all such interventions achieve their objectives, Levin concluded that “an electoral intervention in favour of one of the sides contesting the election has a statistically significant effect, increasing its vote share by about three per cent.”

What does that mean?

“Such a swing in the vote share from the winner to the loser in the 14 US presidential elections occurring since 1960,” Levi word, “would have been sufficient to change the identity of the winner in seven of these elections.”

Stop and think about that for a second.

“I’m not in any way justifying what the Russians did in 2016,” Levin later told the Times. “It was completely wrong of Vladimir Putin to intervene in this way. That said, the methods they used in this election were the digital version of methods used both by the United States and Russia for decades: breaking into party headquarters, recruiting secretaries, placing informants in a party, giving information or disinformation to newspapers.”

So, yes, Americans — and the rest of us — have good reason to be outraged by what the Russians did in 2016. But we need to temper our moral outrage with a dose of equal-opportunity political reality while never forgetting that such meddling can have real and frightening consequences.