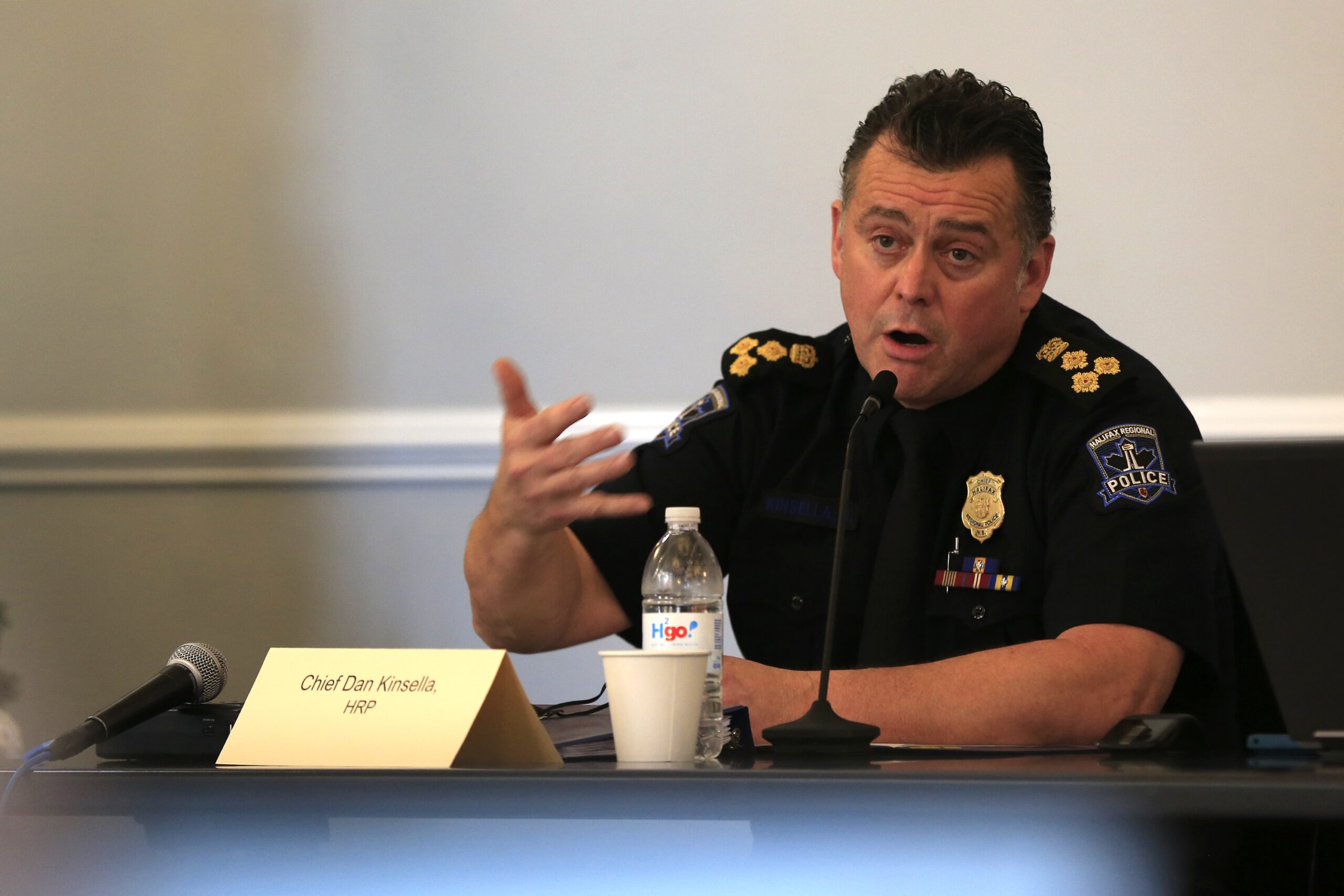 No: 96.6 percent of the 83.7 percent of the Halifax Regional Police Association’s more than 600 members who voted in a recent union-organized poll answered “an overwhelming” no to the statement. No matter how you count, that’s a lot.

That much is clear.

After that, however, the situation — including what is really wrong with the force and what actually needs to be done to fix it — becomes murky.

Before we delve too deeply into the police association’s laundry list of nearly two dozen grievances against the chief, let’s circle back more than three years to Kinsella’s appointment in July 2019.

Kinsella was an outsider, a former deputy chief of police operations in Hamilton, ON, who had just been appointed to replace another outsider, Jean-Michel Blais, a former RCMP officer who was retiring after six years on the job.

Before that, most chiefs had risen through the ranks to the city’s top cop job.

That may be one reason Kinsella wasn’t welcomed with open arms.

But Kinsella also arrived in the position at a fraught moment. Three months before, the Wortley report on police street checks had landed with a resounding thud. It clearly showed that African Nova Scotians were more than five times more likely to be stopped by police in “random” street checks than whites.

Long strained relations between Halifax police and the Black community frayed even further.

During his official installation ceremony, Kinsella declared that one of his goals as chief would be to foster…

“a respectful and inclusive relationship to develop a platform of trust with members of our communities… I know there have been some inequalities and negative interactions, so I’m going to work on that with the community. The community needs to have confidence in its police chief and its police service. So we’ll be working on that…”

Then, in November 2019, Kinsella took to the podium at the Halifax library to offer an “historic” apology to the city’s Black community.

Far too many times we have failed you. I acknowledge the community’s concerns that the actions of police have had a negative and deep impact on generations of the African Nova Scotian community and disproportionately on young Black men. On behalf of the Halifax regional police, I am sorry. I am sorry for our actions that have caused you pain. I am sorry for all of the times you were mistreated, victimized and revictimized.

It isn’t clear, officially at least, how the rank and file responded to their chief — a newcomer to the job and an outsider to the city— apologizing on their behalf for past misbehaviour.

But we can guess.

The police association’s compilation of nearly two dozen individual complaints about the chief, in fact, begins with this one: “consistent lack of support for officers both publicly and internally.”

Like many of the officers’ complaints, the meaning is perhaps deliberately ambiguous.

Was Kinsella’s apology to the Black community an example of his lack of support for his officers or a long overdue recognition of a racial reality?

What about the statement Kinsella issued in June 2020 after a week of local Black Lives Matter protests touched off by what he called the “deplorable circumstances” surrounding the death of George Floyd in the US?

Halifax Regional Police members join the community as we all feel outraged and highly disappointed at the recent events. What happened in these cases should not have ever happened and should not happen again.

Critical discussions are being held that underpin the importance of accountability and trust in policing. Many discussions have also centered on the role of new approaches and partnerships in public safety. We want the community to know we are listening, and we will be a partner in action.

Did Kinsella’s officers share his public outrage at what police officers in Minneapolis had done to George Floyd? Were they, during a growing debate over policing, ready to consider “new approaches and partnerships in public safety?”

Or was this one more example of Kinsella cratering to cop critics or, as the union complaint would have it: the chief’s “changing organizational priorities driven by social media.”

Another instance. After a 2020 CBC investigation revealed that five charges had been laid against HRP officers for intimate partner violence since 2012, Blais refused the CBC’s request for an interview, but he did issue a statement declaring “such behaviour… unacceptable and comes with consequences.”

Was that an indication of Kinsella’s lack of support for his officers? Or a recognition that there the serious societal problem of domestic abuse was also embedded in police culture.

The union’s list also accused the chief of “blatant disregard for the safety of officers,” citing the chief’s publicly announced decision in 2019 to ban officers from carrying their service-issued firearms when not on duty.

It doesn’t mention that the ban came after one of the city’s veteran officers, Const. Jennifer McPhee, was charged with shoplifting at the Bayers Lake Superstore while wearing a wig and carrying her service revolver in her purse.

And, while the police union complained about “insufficient planning for major events,” including “encampment day, Dalhousie homecoming, Fiona…” it isn’t clear whether it was looking for leadership to de-escalate confrontations like the one that happened when police moved in to raze a homeless camp in the summer of 2021 or whether it is looking for stronger shows of force to put down gatherings it doesn’t approve of.

None of this is to suggest that frustrations with the chief are rooted entirely in racism or a desire for unquestioning support for officers’ bad behaviour.

Many of the complaints, in fact, are about working conditions (“massive increase in ‘on the job’ injuries,” “a disturbing lack of support for officers with occupational stress injuries, PTSD, and other workplace psychological injuries,” “lack of success returning injured members to work”) and troubling labour-management issues (“blatant disregard for the collective agreement, “aggressive and retaliatory behaviour/ unwarranted use of the police act process,” “unfair/ non-transparent selection/ promotion processes”).

There is even an unexplained but uncontested complaint that the chief had forbidden officers to pay respect to Const. Heidi Stevenson — the RCMP officer killed in the Nova Scotia mass shooting — on “Wear Red” day.

That is another part of the problem for anyone trying to understand what is really going on inside the force.

Chief Kinsella chose not to respond to the vote or the complaints against him — “I will not be commenting on the specifics of the union process at this time, which notably, the union president chose to first communicate two weeks ago through media interviews. It is best that you speak directly with the union executive on that” — but he did manage to take a personal shot at the union president while accusing him of having done the same. “At every single step, the union leadership and particularly Sgt. [Dean] Stienburg have been resistant to positive change, attacked my character repeatedly over these years, spread false information and acted divisively instead of trying to be part of much-needed cultural change…”

It is difficult — perhaps impossible — to imagine positive solutions emerging from the mud-wrestling among the current players in their current leadership positions.

But the issues with policing in Halifax go far beyond this internal spat.

Testimony at the mass casualty commission, for example, exposed rifts between management of the Halifax force and the RCMP, which shares responsibility for policing in HRM.

Perhaps more significantly, the city’s board of police commissioners still hasn’t come to preliminary grips with the 36 recommendations contained in Defunding the Police: Defining the Way Forward for HRM, a major report that was tabled back in January 2022.

The critical issue, as El Jones, the committee’s lead author, laid out to the commissioners at the time:

We have disinvested and defunded social services and then turned to the police to fill in the gaps, which is also not fair to the police, and not reasonable or rational or efficient, or the best way of doing things…

So in order to shift away from policing, we also need to shift the way we resource other organizations and the way, more importantly, that we think about why we rely on police when we can rely on other strategies … defunding police is in many ways about reinvesting in fundamental and historically underfunded community resources.

By May, the best the commissioners had managed was to suggest they would come up with terms of reference for a working group to consider the report in time for the next month’s meeting.

As my colleague, Zach Woodford reported:

On November 2, Zane followed up after the commissioners most recent meeting:

… the working group, comprising [Coun. Lisa] Blackburn, Coun. Becky Kent, and Commissioner Yemi Akindoju, met four times between July and September. They assessed each recommendation, looking at who was responsible and what role the board and HRM could play in implementing them.

Blackburn reported back to the board on Wednesday that the working group wrote a draft report and submitted it to the clerk’s office and the legal department.

“And it was suggested that it might be a better idea to make this subcommittee one of regional council as opposed to one of the board of police commission,” Blackburn said.

The only definitive conclusion from all of this is that the Halifax Regional Police is a hot mess. And it isn’t getting better.