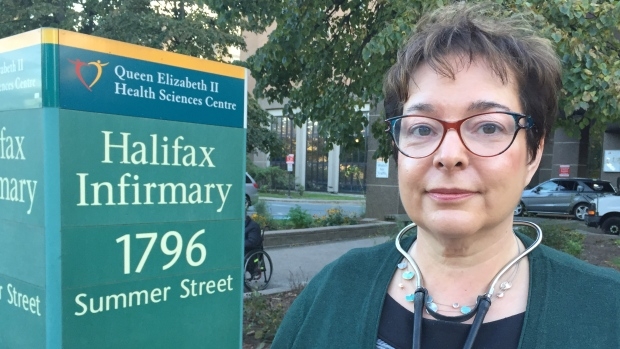 This column originally appeared in the Halifax Examiner  March 5, 2018.

In one small sense, she had. We’ll get to the broader sense — and what it should mean, but probably won’t, for Capital Health and for the provincial government — later.

But let’s first go back to June 2016. After a 33-day trial, a jury determined that Capital Health had acted in “administrative bad faith” in its dealings with Horne from 2002 on, and awarded her $1.4 million in damages.

Horne’s lawyers appealed. They argued the trial judge had erred by not allowing the jury to consider her claim the health authority’s bad behaviour had also breached her contract with it. And they claimed the judge’s decision that “restoration of her research career was not a separate head of expectation damages for breach of contract” was wrong.

The authority counter-appealed on four different grounds, including that “the jury’s award of $1.4 million was a palpable and overriding error.”

In its decision, the appeal court dismissed all of the appeals except one: Capital Health’s argument the jury gave Horne too much money.

The court said the trial judge had confused the jury by his “ambivalent” instructions regarding whether it could consider “restoration” of her research career in its damages determination. Since the jury “may” have calculated “a significant portion” of its $1.4 million award on the basis of those confusing instructions — no one, including the court, knows what was in the jury’s mind — the appeal court judges decided to “substitute” their own judgment as to the appropriate damages.

They did that using the usual legal hocus pocus of “principal authorities” and precedents, ultimately assessing “Dr. Home’s general damages for loss of reputation and loss to her research career at $800,000,” $600,000 less than the jury gave her.

So, in that sense, Capital Health won, and Dr. Horne lost.

But the devil, as always, is buried deep in the details that don’t make headlines. Appeals require judges to revisit cases, re-examining all the evidence presented at trial.

On that score, the appeal court’s conclusion is unequivocal — and damning in its assessment of Capital Health’s bullying, harassing and discriminatory behaviour. The judges enumerate 11 findings of fact they say are “reasonable and available from the record and in our view precipitated the jury’s award:

The appeal judges’ decision goes on to note:

“We are satisfied that Capital Health’s bad faith caused significant and lasting damage to Dr. Home’s reputation. Just as being unethical afflicts the core of a lawyer’s professional integrity, being termed a risk to patients pierces the heart of what is expected of a physician. lt is hard to imagine a more vital blow to a medical professional’s station. We are further satisfied that the consequences will follow Dr. Horne well into the future.

“Dr. Horne is a scientist. She wanted to devote her talents and energy to conducting research. Capital Health says she is doing just that, having found success in new research projects, and that she has lost little in terms of her ability and desire to be a researcher. We disagree. Dr. Home wanted to devote herself to the three projects she developed in 1999 and 2000. However, those projects were rendered obsolete by the time she was able to return to meaningful research pursuits. Her ability to forge onward did not replenish her lost opportunity.”

So, while the judges did quibble over the appropriate pecuniary punishment for Capital Health’s outrageous treatment of Dr. Horne, it never — not for a single sentence — disputed the truth of what Dr. Horne alleged.

And that brings us to this.

Neither Capital Health nor the Nova Scotia Health Authority (which assumed Capital Health’s legal responsibilities in 2015) has ever publicly apologized to Horne for years of bullying and harassment. Nor has the authority ever once acknowledged that its irresponsible decision to publicly sully Horne’s reputation and undermine her research not only cost the doctor her important research projects and promising career, but also cost the health care system millions of dollars in outside funding.

While all this was going on, successive provincial governments — Progressive Conservative, Liberal, NDP and Liberal again — chose to look the other way, giving carte blanche to the health authority to hire hugely expensive, by-the-hour outside lawyers to continue legally bullying Horne, who was forced to spend $1.4-million of her own money just to defend her reputation. There has never been a public accounting of how many more multiple millions the health authority — which is to say taxpayers — spent on outside lawyers (not to forget the time of its staff lawyers), who used the health care system’s scarce resources to cover their collective asses instead of improving Nova Scotia’s failing health care system.

Now that all the legal is said and done, what has been the response from the province and the health authority? Mumble-mouth nothings from mealy-mouthed nobodies:

Health Minister Randy Delorey: “We respect the court process and are confident [the health authority] will make any changes as appropriate as a result of this case.”

The health authority: “This has been a lengthy process for all parties and NSHA looks forward to moving on from this matter with a continued focus on fostering an environment for leading health research and care.”

Not good enough. Not even close. But par for this province’s abysmal course when it comes to the Horne case.