On October 24, 2016, CBC Halifax journalist Phlis McGregor happened to hear an interview on As It Happens about a York University research study that analyzed two years of Ottawa police data.

Between 2013 and 2015, the report said, police there pulled over nearly 82,000 drivers for mostly routine checks. The data showed Middle Eastern and black drivers were both significantly more likely to be stopped by local police than other drivers. Burrowing more deeply into the material, the researchers discovered that — based on their overall numbers in the population —  young Middle Eastern men were 12 times more likely to be stopped than others; young black men eight times.

While members of those groups were often pulled over for what police officers themselves described as “suspicious activity,” the reports indicate those stopped were then disproportionately more likely to have no action taken against them after the stop. Did that indicate police didn’t have actual cause to stop them in the first place?

Over the years, McGregor had heard African Nova Scotians describe their own unhappy encounters with the police. She remembered a 2003 provincial human rights case in which a board of inquiry determined local police had stopped local boxer Kirk Johnson simply for “driving while black.”

What, if anything, had changed here in the more than 15 years since then, McGregor wondered?

Did Halifax Regional Police keep similar statistics for its own police stops?

The next day, she sent an inquiry to HRP communications asking exactly that question. It turned out the police did maintain “Street Check” data, which included a field for ethnic background. They’d been collecting information since 2005 — two years after the Johnson case — but had never bothered to analyze what they’d gathered.

So McGregor filed a Freedom of Information request for the raw data, which she eventually found in her mailbox the day she returned from Christmas holidays in early January.

At that point, she says, the CBC’s full local investigative team got involved. Over the next few days, while data journalist Jack Julian crunched and transformed the raw material into more meaningful information, four reporters began piecing together angles and reports for radio news, radio current affairs, digital and TV news… often while juggling other, unrelated assignments. Once those initial stories were broadcast, of course, there were first and second-day follow-ups , including responses — from Kirk Johnson, among others — and new leads to pursue. 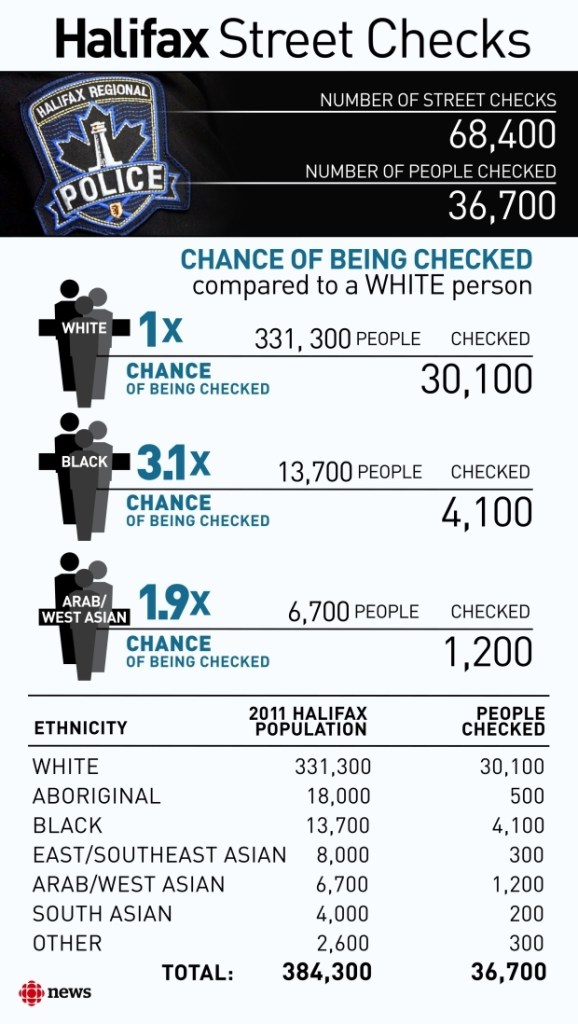 It is, McGregor acknowledges now, “hard to put [an] exact number of hours” on the time the journalists spent producing their reports. But it was significant.

There are few surprises in what the local police data revealed. The results turn out to be depressingly similar to what previous reports have revealed about racial profiling in Ottawa, in Toronto, in Chicago, in you-name-the-place. But that doesn’t make analyzing and reporting on the data less relevant or important.

Those of us in the white community need to be reminded regularly of realities our black neighbours endure every day: that the police treat them differently and worse; that we have a systemic, ongoing never-ending problem of racism in our community we need to recognize and confront.

There are — clearly — no guarantees simply reporting on all of this will make it go away. If there were, we’d be living in a different world. That said, we won’t ever seriously confront the issue if we’re not confronted with it regularly.

Which means we need more professional journalists working together in real newsrooms — who have the time and the resources and the mandate — to do what the CBC reporters did in this case.

That’s not good for any of us.

Tomorrow, the nearly 60 reporters and editors of the Halifax Chronicle Herald will begin their second year on the picket line.