You’ve been lapped. While you were tossing out the tree and packing up the last of the Christmas ornaments for next year, that whirring whoosh of wind you heard was one more of Canada’s highest paid CEOs zipping past you, Flash-like, on the cash fast-track through 2017.

By 11:47 a.m. on January 3, the first working day of the new year, Canada’s 100 highest paid CEOs on the TSX Index had already “earned” on average as much as the average Canadian wage earner will make during the entire year. 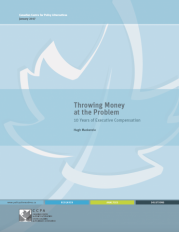 So says the Canadian Centre for Policy Alternatives in its latest annual report on income inequality, Throwing Money at the Problem: 10 Years of Executive Compensation. 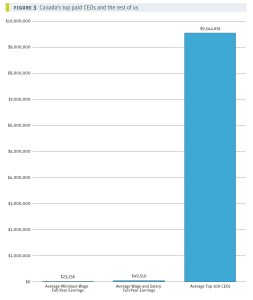 While this now annual CCPA report card offers a clever way of visualizing the issue of income inequality, it does much more than that.

It also undresses the main arguments of those emperor’s-clothes apologists for astronomical CEO salaries.

Countering the notion such pay is a “reward for good performance,” for example, the report points to a 20-year study of executive compensation and corporate performance showing “the more CEOs got paid, the worse their companies did.”

And the report also makes clear — the financial facts speak for themselves — we can’t depend on “controlled, incestuous and circular” corporate boards to reign in runaway compensation packages. Even the former head of the University of Toronto’s prestigious Rotman School of Management calls the process “criminally stupid.”

Concludes the CCPA: “it’s time to package up some skunks to send to the CEO pay garden party.” By which it means it’s time for the government to govern.

If Ottawa increased top marginal tax rates for high income earners, for example, the CCPA says that could “serve to dampen down the incentive to demand increasingly higher levels of compensation.” Imposing an additional tax penalty on those who are paid “in excess of a given ratio to average pay” might be even more successful.

More modestly — but perhaps more realistically — the CCPA says the government should tax proceeds of stock options like ordinary thee-and-me income. For reasons best known to tax lawyers and corporate compensation lobbyists, stock options, which have become one of the more clever ways corporations employ to quietly goose real CEO compensation, are currently taxed at only half the rate the rest of us pay. That’s a huge tax break, worth billions to Canadian executives, and costing billions for the rest of us.

The CCPA report isn’t Pollyana-ish about prospects for change. When Bill Clinton limited corporate tax deductions for salaries over $1 million, it notes, corporate compensators simply found another way — topping up $-million salaries with uncovered bonuses, stock options and grants — to get around the limit.

The same thing may already be happening now in Canada with stock options. During the 2015 federal election campaign, Justin Trudeau’s Liberals  promised to end the sweet tax treatment for stock option compensation. After it was elected, however, corporate Canada launched a relentless lobbying campaign to change its mind. They’ve already partially succeeded, with the finance minister recently suggesting any changes would only apply to “future” stick option grants, “giving corporatons and their well-compensated executives ample time to come up with new ways to push up the compensation and avoid tax.”

Look out, he’s done it again. And again. Whew… By the time you finish reading this, Mr. Top 100 CEO — 98 of the top 100 are men — will have managed another couple of complete sweat-free loops of the same annual earnings track it will take your average Canadian 51 more weeks to slog around once.