Canada’s border: Donald Trump stands on guard for he This column originally appeared in the Halifax Examiner July 9, 2018.

“Border disputes do not go away; they fester. And when other factors push them back to the surface — the discovery of valuable resources, an assertion of national pride, a mishap at sea — the stakes can suddenly rise to a point where easy solutions become impossible.”

“It baffles me just as much as anybody else. I have no clue why [US border patrol vessels are] here, spending taxpayers’ money and resources… For whatever reason, they now have a presence.”

The dispute between the United States and Canada over Machias Seal Island and North Rock — two piles of treeless, mostly uninhabited rocks in the Gulf of Maine — has been festering, mostly quietly, since 1783.

That’s when the Treaty of Paris between England and the newly independent United States of America muddied the territorial waters.

The treaty gave the new country title to all islands within about 110 kilometres of its shores. So… the islands, ipso facto, must belong to the Americans. Within the “jurisdictional waters of the United States,” as a US Border Services spokesperson put it succinctly recently. 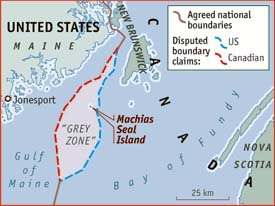 Not so fast. Another clause in the treaty excluded any island that had ever been part of Nova Scotia from America’s greedy maw. And there was, you see, this dusty 17th century British land grant that had declared the 10-acre islands part of Nova Scotia (now New Brunswick). To affirm its sovereignty, the British even planted a lighthouse on the island in 1832. It still operates today, even though the lighthouse is now automated and the rotating, helicoptered-in-for-28-day-shifts Canadian lighthouse keepers are its only human inhabitants. (The islands may not have any voters, but they do have a member of the Canadian parliament: Liberal MP Karen Ludwig.)

Since possession-is-nine-tenths and all that, Canadian officials declare equally confidently that “Canada’s sovereignty over Machias Seal Island and sovereign jurisdiction over the 210-square nautical mile surrounding waters is strongly founded in international law.”

In 1984, when the US and Canada were attempting to finally tidy up all their remaining boundary disputes by submitting them to the International Court of Justice at La Hague, the Canadians refused to include the Machias mess in the process because we claimed our case for the island was “so strong” that even agreeing to arbitration would acknowledge the title might be in question. We couldn’t do that. So we did nothing. 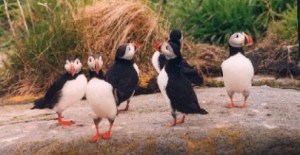 Perhaps Canada presumed the existing state of affairs would continue in perpetuity. After all, no one asked the puffins, who nested on the island, to prove their citizenship. Nor did anyone demand to see the passports of the tourists, who came by the boatload in summer from both Maine and New Brunswick, to watch the puffins puff. Canadian and American fishers both plied the “grey zone” waters around the island, harvesting lobsters in mostly amiable crustacean competition. And there weren’t then — and haven’t been since — any major oil or gas discoveries to make the surf and turf valuable enough to fight about.

But then… along came The Donald. Now that festering, back-burner border dispute is suddenly bubbling hotter than a summer lobster boil.

In the past month, US Customs and Border Protection stopped 21 vessels — mostly fishing boats going about their usual fishing business — in the Gulf of Maine’s Canadian/US/international waters and “interviewed” those aboard as part of what it calls its role to “enforce [US] immigration laws and other violations of [US] federal law.”  According to one of those whose fishing boat was boarded, the border patrol officers claimed to be “looking for illegal immigrants.”

Or should that be from the United States.

“There is no threat, there’s no indication of any movement of humanity from New Brunswick or Nova Scotia through the Bay of Fundy to the United States,” Atlantic Canada’s best-known immigration lawyer, Lee Cohen, understated to the CBC. Traditionally, he explained, most of that traffic has been heading to Canada rather than the US, “but it’s particularly true in the last year or so, with the election of Donald Trump.”

Stephen Kelly, the retired US diplomat who now runs the American-spelling Center for Canadian Studies at Duke University, agrees. “If anything, people are sneaking the other way,” he told Canadian Press. “They’re trying to get out of the US and into Canada to claim asylum.”

Back in 2012 — before The Donald became The President — Kelly had argued in his New York Times op-ed it was past time for Canada and the US to settle their small-beer border dispute:

“The fact that so little in the way of resources appears to be at stake, far from justifying the status quo, should be the main reason for resolving the issue. And for those concerned about blowback from ‘giving away’ territory, letting the international court decide the case provides the most political cover… Wouldn’t we feel silly that we didn’t take the opportunity to resolve this when the stakes were relatively low.”

Meanwhile, Donald Trump’s US Customs and Border Protection says it has no intention of stopping its provocations on our northern border.

Just another day in build-that-wall Trumplandia. Soon may it end.