Can a ‘white van driver’ be a terrorist? Discuss This column originally appeared in the Halifax Examiner on June 26, 2017.

I was watching CNN last Sunday night. It is my guilty-pleasure punishment for the sin of obsessing too much about what Donald Trump might do next.

Trump had filled up his Father’s Day dissing his predecessor, Barack Obama, in 140-character vitriol. He’d falsely claimed the latest public opinion poll showed his approval rating “higher than O’s #s,” for example, and then favourably retweeted a tweet from his son, The Mini-Donnie, bragging that Big Donald had convinced North Korea to release a captive American student while Obama had failed to free him. Nyah, nyah.

But CNN’s designated chatterers, of course, were primarily focused on trying to make sense out of the ever more nonsensical. Had Donald Trump really acknowledged, in a tweet-fume Friday, that he was under investigation by the special counsel, or was this yet another false flag — a la the Comey tapes — to confuse his enemies, and, of course, his friends. His friends did seem confused. On the Sunday morning talk shows, Trump’s legal mouth puppet had insisted the president wasn’t under investigation at all, but then said he was. Would he fire the special counsel? No. Yes. He was thinking about it…

And then, a bit of what might be real news.

The anchor interrupted with a bulletin from London police reporting a “vehicle in collision with pedestrians” in the Finsbury Park area of the city.

We all understood immediately what that might mean. Just over two weeks before, eight people had been killed and close to 50 injured after a van crashed into pedestrians on London Bridge. Less than three months before that, four other people died when another man drove a rented SUV into innocents walking on Westminster Bridge.

In the first hours, as media scrambled to get their cameras and reporters to the scene, and additional tidbits were teased out — the attack had happened around midnight outside an Islamic welfare centre associated with mosque, it had happened after late night prayers during Ramadan, the victims were Muslim worshippers, witnesses claimed the suspect, a white male shouted “I want to kill all Muslims” — local reporters were careful not to utter the T word.

That’s understandable. Journalists have been rightly criticized in the past for leaping to the terrorist conclusion well before there was evidence to support it. Which is why journalists now are much more likely to wait for the police to officially designate an attack as terrorism before doing so themselves.

Although there is no single definition for terrorism, it is generally accepted that violent acts carried out for political, religious or ideological reasons with the intent to intimidate the public, or an identifiable group within society, fits that bill.

Terrorism,  as the BBC’s Editorial Guidelines note, is a “difficult and emotive subject with significant political overtones… We try to avoid the use of the term ‘terrorist’ without attribution.”

The problem in this case was that the London police themselves seemed inordinately slow to name it. Three hours after the attack, police spokespeople were still saying it was “too early” to declare the attack terrorism. It wasn’t until 8 a.m. that they finally acknowledged what seemed obvious to the rest of the world.

Compare that to the London Bridge and Westminster attacks. They were both declared terrorist incidents within a few hours.

The difference? The perpetrators of the first two attacks were Muslims — aka terrorists — while the suspect in the Finsbury Park attack was a 48-year-old white man. 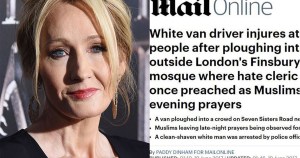 “The Mail has misspelled ‘terrorist’ as ‘white van driver,’” author J.K. Rowling tweeted. “Now let’s discuss how he was radicalized.” She later deleted the tweet, though not her point.

In fact, rather than explore how he’d been “radicalized” — de facto for Muslims in similar situations — journalists wrote about how the suspect had too much to drink at his local that night, had been on anti-depressants, had recently tried to commit suicide by throwing himself in a river, had been seen, stinking of alcohol, asleep in a van with the door open the night before the incident… And, oh, yes, he was very upset by the attack on London Bridge.

Perhaps this is what inspired the London Sun to call the unprovoked violence on the worshippers a “revenge attack.” Or what led to that initial Daily Mail headline: “White Van Driver Plows Into and Hurts at Least 10 People Outside Hate Cleric Abu Hamza’s Former Mosque in London’s Finsbury Park.”

The headline writer wasn’t the only one to immediately connect the mosque to old stories involving supporters of radical Islam. Peter Bergen, CNN’s go-to guy on all things terrorist, was equally quick to describe the mosque as “notorious. I think it’s significant that they had the reputation historically of being one of the most militant mosques in London.”

It was apparently less significant that the mosque had been “reconstituted” under more moderate management in 2005. (Its imam, it would later be reported, even protected the suspect from attack until he could be turned over to the police.)

Whatever the connection, isn’t that victim blaming?

We shouldn’t be smug.

It’s worth remembering that the young white man accused of murdering six innocent worshippers at a Quebec City mosque in January is charged with murder and attempted murder, but not with terrorism.

Would that have been the case if he had been Muslim and the place of worship a Christian church?