This column originally appeared in the Halifax Examiner on August 8, 2017

Back in the summer and early fall of 2014, I served on an inelegantly named “Faculty Working Group on the Future of the College” at King’s, the small liberal arts and journalism university where I’ve taught since before forever.

Our working group was set up in response to a six-months-in-the-making report from a “Long Term Financial Strategy Task Force” established by our board of governors the year before.

Later that fall, following the task force’s report and then the report of our working group, the university set up a broadly based “College Task Force on the Future,” on which I also served.

We — faculty, staff, student, board and alumni representatives — lost more hours than I can count, or ever get back, that fall and winter as we grappled with existential questions like whether King’s, which boasts it is the oldest chartered university in Canada, had a future and, if so, what that future could possibly be, given the state of our finances?

I won’t kid you. There were/are lots of reasons for Nova Scotia universities’ ongoing financial crises. Some of them, including at King’s, have been of our own making. But the most significant issue, the mountain we could never climb, was this one, as simply stated in our working group report:

“Since 2011, the university has had to deal with a 10 per cent decrease in our provincial operating grant at the same time that government has capped tuition increases.”

We were trapped. Costs were inevitably increasing. The university had already plucked all the low hanging fruit from our operating expenses, then cut fat, and then chopped and cut and cut some more until there was nothing left. In the words of our final report, “any [future] cuts will almost certainly touch bone.”

On the income side of the ledger, government revenues had declined, and the government-imposed cap on tuition increases meant the only other significant, if unpalatable revenue-raising option — increasing tuition fees — was not even available to consider.

The government wouldn’t help. We knew that because our administration had asked. And asked again. And made our case. And pleaded. And… nothing.

Suck it up. So we did. We voluntarily froze our salaries and continued to slice deeper and deeper into the bone of what remained of our already modest operating budget. We and our students — not to forget the students at other similarly under-funded universities — are the poorer for it.

But now, three years later, in the middle of a sweet, sweltering summer after a Liberal provincial election victory based on a balanced budget — built on the backs of all its many and various freezes and cutbacks, including to universities — we find that not all universities were created, or funded, equally.

While Nova Scotia’s other universities were busy slicing and dicing, Acadia was applying for — and routinely being granted — government bailouts for its financial woes.

On July 27, the CBC’s Michael Gorman reported on the tabling of the province’s financial accounts for 2016-17.

Those numbers, he said, revealed that Acadia had “asked for, and received, a $3.5-million increase in its operating grant and forgiveness of a $7-million government loan.” That forgiven $7-million loan?

“The $7-million loan from the Strategic Opportunities Fund Incorporated, or SOFI, is from 2011 and was for operating expenses to help offset a decline in the school’s provincial operating grant.”

Before the day was out, that initial $10.5-million had ballooned to $24.5-million as the result of more revelations. For five years, beginning in 2012-13, the government had been secretly shoveling $3.5-million extra into Acadia’s coffers every year to fluff up its operating budget and allow it to avoid “many more difficult decisions.”

After that, the buck-passing, ass-covering, hot-potato-tossing began in earnest. The new finance minister, Karen Casey, referred all questions about her government’s secret-Santa Acadia gifts to bureaucrats in the department of labour and advanced education, who flipped the boiling potato over to the university — “I think it’s best to talk to Acadia for the details” — whose new president, Peter Ricketts, simply explained the university’s finances are now in good shape, thank you very much.

So what really happened?

There’s been plenty of speculation, most of it centred around former Acadia President Ray Ivany — the author of a heavily hyped, NDP-government-commissioned and Liberal-government-championed report on the province’s future — and his wife, former journalist Laurie Graham, who was appointed Premier Stephen McNeil’s principal secretary last year and paid significantly more than either her predecessor or McNeil’s own chief of staff.

Given that Graham’s appointment post-dates most of the money flowing from the government to Acadia, it seems unlikely she had much, if anything, to do with the specifics of the ongoing secret deals. 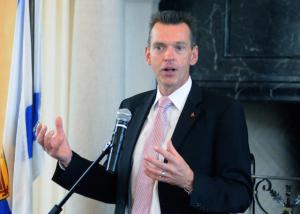 But there’s no question Ivany — the smart, politically savvy insider who has served on fiscal-salvation task forces for all three governing parties and presided over the dramatic expansion of the Nova Scotia Community College system before taking over as president of Acadia — is a well-respected (as well as well-connected) super self-salesman who has long had a direct pipeline into any premier’s office.

Did Ivany simply do a better job than all those other supposedly smart, sophisticated Nova Scotia university presidents at sweet-talking the faux fiscally disciplined McNeil Liberals out of $24.5-million.

Did Acadia deserve a bailout while others did not?

I don’t know. But I’d like to. And not just because of all those hours we spent cutting the uncuttable while others were counting their cash. There are the larger questions of government transparency, accountability, hypocrisy. Universities deserve to know what really happened. So do their students. And taxpayers.

The government and Acadia should voluntarily release any and all of the letters, reports, memos, phone logs, emails, meeting notes, briefing notes, phone notes and napkin notes behind what must have been an ongoing series of secret decisions over the years made in direct contradiction to its own publicly stated and oft repeated universities funding policy.

If they don’t — and you can bet the mortgage they won’t — then one hopes the opposition and media will use the province’s access to information rules to pry as many of the facts as possible from their clutching fingers.

We deserve to know.