This column appeared originally in the Halifax Examiner December 11, 2017.

Joan Baxter’s personal Northern Pulp story begins on “one of those stunningly clear, blue-sky mornings that nature sometimes bestows on Nova Scotia.” It was June 2, 2016, and Baxter had decided to start the day with a run near her home in Colchester County, NS. But as soon as she stepped outside, “the air was acrid, a noxious blend of sulfur overlaid with something acidic and metallic…” After only a few hundred metres, “my eyes were stinging, watering so heavily I could hardly see. My head began to pound, then to ache. Then my nose started to bleed.”

Baxter, a Nova Scotia native who’d moved back to Canada a few years before, was not unaware of the noxious pollution that often spewed from the pulp mill in next-door Pictou County. She’d smelled it occasionally at the base of the Wentworth ski hill or on the ferry to Prince Edward Island. But now she’d come face to nose with its sick-making impact outside her own home, a full 40 kilometres from the mill.

Baxter is an award-winning journalist and author of six previous books. She’s spent much of her adult life in Africa, reporting on and writing about  seven countries, some of them new democracies, some not democracies at all, covering wars and coups, interviewing “four or five” African presidents along the way.

So she did what journalists do. She began to ask questions. She discovered a Clean-the-Mill website run by a community advocacy group, and was “floored” by the research they’d collected. She talked to people in the area and was astonished again. “People began dumping files on me, scrapbooks, their grandparents’ scrapbooks.” 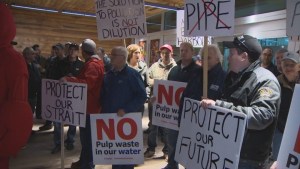 The deeper she dug, the more she realized the larger story — the story of a community struggling for 50 years for someone somewhere anywhere  to do something about the mess the mill had made of their community — was book worthy.

She encountered “a steep and shocking learning curve. When I started I didn’t know where Boat Harbour was. I didn’t realize the influence of the pulp industry, I didn’t realize how close our governments, elected and unelected (civil servants), were to the industry.”

While there is no question Baxter developed a perspective on the story based on her research, she was a journalist and keen to discover the other side.

She approached the  mill’s current owners, the  multinational Paper Excellence Group, as well as Northern Pulp’s local managers. She even sent a registered letter to former premier John Hamm, the chair of the company’s board, asking for an interview. In the end she received this emailed response from Kathy Cloutier, the company’s spokesperson:

“Good morning Joan, Thank you for your email. Upon discussion within Paper Excellence, Northern Pulp executive team and board members the decision has been made that Northern Pulp will not participate in this project.”

She got much the same unhelpful non-response from local union leaders. Her request to interview current premier Stephen McNeil went unanswered. The province’s department of the environment shuffled her through “layers of communications” and lards of bafflegab.

Still, she kept digging. Wherever possible, she used the historic public record — during the mill’s 50 years, there have been 12 Nova Scotia premiers and five foreign corporate owners — to fill in the gaps and explain official positions. 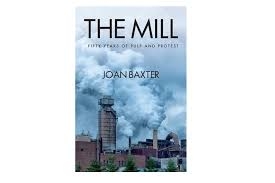 At the end of the day, The Mill: Fifty Years of Pulp and Protest, Baxter’s thoughtful, well-researched, highly readable account of the history of the mill and the controversies it has stirred, contained 856 Endnotes, meticulously documenting her sources.

Her conclusion: “In the end, politics and the lure of economic development based on pulp — and pulp industry jobs — prevailed. Science and scientific advice about sustainable management of forest resources of the province be damned.”

Despite that, the book is no polemic.

Baxter even interviewed Donald Burt MacKenzie, a local boy and then newly minted engineer whose own international career was launched after he was hired in 1965 by the giant American engineering firm contacted to construct the mill. He told Baxter the original mill was “modern and state of the art,” though he acknowledged it was only initially designed to function for 20 years. “Still,” Baxter writes, MacKenzie insists today “the mill has provided work and good income for many people, and many of his own relatives, including his son who works there today, president of the union.”

Sound like a hatchet job? Sound like a “non-factual, rhetoric-filled account of the mill and its history [that is] quite frankly something that is offensive to anyone who has an association to the mill”?

That last quote comes again from mill spokesperson Kathy Cloutier — she of the “will not participate” email — in a letter she sent to the mill’s retirees. She shared with them a form letter the company had composed for current employees to sign and send to Chapters Indigo, and encouraged them them to do the same. Its purpose: to protest a planned December book signing by Baxter at the Coles outlet in New Glasgow’s Highland Square Mall. The threatening, company-written form letter noted:

“This book is a direct insult to the nearly one thousand combined employees and retirees, many of whom continue to live in this region. This is one person profiting off negativity towards Northern Pulp and its past and present workforce that have raised families, put children through university and continues as a generational employer. Should [Chapters Indigo] management (local or headquarters) follow through with this book signing promotion, I will NO longer be a patron of Coles in New Glasgow or any other Coles/Chapters locations.

A few days before the scheduled signing, Chapters Indigo cancelled it over what a bookstore spokesperson called concerns customers wouldn’t be able to have a “joyful and safe experience” if the signing went ahead.

The good news is that the mill’s heavy-handed attack on freedom of expression and the bookseller’s own cowed response appear to have backfired. The story has gone national and viral. As a result, websites for the distributor, Nimbus, and Amazon, report the book is “temporarily out of stock.”

At one level Baxter is bemused. After her previous books were published, she says, there was “a quiet burst [of publicity] followed by a little tiny blip, and then [the book would] die, ending up in total obscurity forever, mourned by no one except me.”

That this book’s fate will be happier is welcome news. But Baxter remains troubled that “in 2017, a company can use its power to shut down a book signing in a small bookstore in a small town. It’s disheartening.”

The Chronicle Herald reported Saturday Northern Pulp had cancelled the contract for a planned employees’ Christmas party at Pictou Lodge after its general manager “spoke to the poor record that our local pulp mill has when it comes to environmental standards and their record of non-compliance” at a tourism industry event in late November. Company officials demanded an immediate letter of apology. When the lodge manager refused, the mill followed through on its threat to cancel its already booked party for 300 workers.

Is this really the best we can expect — and accept — from our province’s corporate citizens? Or from our former premier John Hamm, the mill’s board chair? He and the company owe the community — and Baxter, not to forget the manager of the lodge —immediate public apologies for their schoolyard bully-boy tactics?

And what of our current political leaders? With the exception of Truro NDP MLA Lenore Zann and  Pictou West Tory MLA Karl MacFarlane, who courageously and correctly linked cancellation of the book signing to “freedom of speech,” we’ve heard nothing at all from our current premier.

Perhaps Stephen McNeil — like premiers before him — believes “politics and the lure of economic development based on pulp — and pulp industry jobs” trump freedom of speech, trump the environment, trump self-respect.