Justin Trudeau, the mauler-mailers and the deafening silence of our Tory MPs

The bad news is that not one of them — Peter MacKay, Gerald Keddy, Scott Armstrong, Greg Kerr — seems prepared to denounce either their bullying content or their flagrant abuse of public funds.

The publicly-funded mailers, which are intended to allow local MPs to update their constituents on what they’ve been doing for them in the House of Commons and alert them to programs or issues of local significance, have been hijacked by the national parties — mostly but not exclusively the Tories — to fund partisan federal muck-tossing. 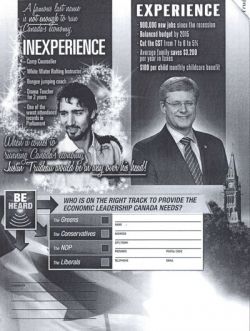 Consider the latest, which is scheduled to “blanket” the country June 1. Using every cheap font and design trick from a 1970s graphic designer’s handbook, it flanks side-by-side photos of Trudeau (dated, wispy beard, jacket over his shoulder, bathed in sparkles) and Harper (current, formal, larger, surrounded by what one wag called an “angelic glow”). Above the photos, the ad features a series of fact-maligning, decontextualized, bullet-smearing points intended to contrast the two men.

Perhaps our Nova Scotia MPs should read them more carefully.

“A famous last name,” mocks the mailer, “is not enough to run Canada’s economy.”

How about Canada’s defence? Consider Peter MacKay, whose admittedly more modestly famous last name smoothed his own entrée into federal politics and whose resumé is sprinkled with the fairy dust of semi-glamorous liaisons with semi-glamorous celebrities… Is having his semi-famous last name really enough to justify botching the purchase of a fleet of untendered fighter jets?

In the mailer, the Tories mock Trudeau’s supposed inexperience by highlighting the fact he was once — horrors — a “drama teacher,” a “camp counselor” and “white water rafting instructor.”

Should Scott Armstrong’s next campaign flyer begin with the embarrassing boast he was once a kids’ baseball coach? Should Gerald Keddy confess he is — as his bio attests — an “avid… outdoorsmen(sic)?” Should Greg Kerr own up to the fact he, like the unqualified Trudeau, was once — oh no! — a school teacher?

Or should our MPs finally stand up, tell their leader enough is enough, and demand an end to the gutter politics that demeans us all?