Are election campaigns any place to discuss serious issues?

Election campaigns are no place to discuss serious issues. That’s what Kim Campbell — Canada’s now-you-see-her-now-you-don’t, first-and-only-female prime minister — infamously declared in 1993 in the middle of her one and only federal election campaign as a party leader.

Though I was among those who mocked her at the time, I now believe she was right.

Just as I now believe what is said in all those hyper-hyped political leaders’ debates during election campaigns rarely affect the electoral outcome, much less the future of society as we would like it.

Debates themselves tend to be defined by — and remembered for — theatre. 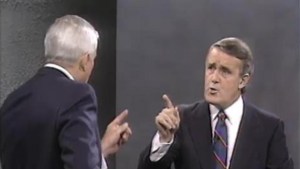 Consider then-PC leader Brian Mulroney’s delicious five-word smackdown of new Liberal Prime Minister John Turner during the 1984 federal leaders’ debate. Turner had just offered his milquetoast defence that he’d had no choice but to OK a boatload of patronage appointments made by the outgoing prime minister, Pierre Trudeau.

“You had an option, sir!” Mulroney flashed while Turner flustered.

While that may still qualify as the defining media moment of that election campaign, it, by itself, didn’t doom Turner. Too many years of Pierre Trudeau had already done that. 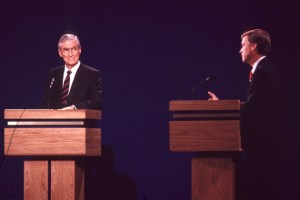 Perhaps the most famous debate zinger in modern political history was Texas Senator Lloyd Bentsen’s brilliant takedown of his Republican vice presidential rival in their 1988 debate. Dan Quayle had just — wishful-thinking — compared his own lack of political experience to that of American political icon John F. Kennedy.

But even that didn’t save the Michael Dukakis/Lloyd Bensten Democratic presidential ticket from the dustbin of political history.

Which leads to the question: where and how should we discuss serious public policy issues?

I’m certainly not suggesting election campaigns or debates are a waste of time.

Election campaigns may indeed be too filled with sound and fury, photo-ops and who’s-up/who’s-down horse-race analyses, all saying much and signifying little. Couple all that with our new-found and now never-ending obsession with all the embarrassing, details-scraped-from-the-soles-of-the-Internet’s-Wayback-Machine social media gaffes candidates may have made long before they were even candidates for public office — and who has time for discussion of serious issues?

Still, all of our provincial political parties did have an opportunity during the campaign to publicly lay out their own specific promises: capping classroom sizes, investing in front-line health care workers, upgrading highways and blah blah blah… (The voters’ essential question of whether any of those leaders would actually fulfill  any of those promises — see Nova Scotia’s recent political history — is another matter for another column… or perhaps a book! But I digress, as usual…

Even last week’s CBC provincial leaders’ debate — universally dismissed by the hard-to-please punditi class as a snoozefest — still managed to showcase each of our main political party leaders responding seriously to legitimate questions, and interacting with one another in a mostly respectful, reasoned way.

All three leaders appeared well versed and more than capable of defending their party’s policy positions, as well as dissecting the weaknesses of their opponents. Occasionally, we even glimpsed their personalities peeking out from behind their handler-scripted lines: Stephen McNeil’s prickly responses to criticism, Gary Burrill’s folksy preacher charm, Jamie Baillie’s heartfelt concern about the state of our province’s mental health policies …

And yet… we don’t seem capable of using election campaigns or leader debates to conduct adult discussions about the broader, matters-most issue of the kind of society we want for our kids and grandkids.

We’ve now lived through close to four decades of “neoliberalism” — that mostly unspoken, unquestioned group-think assumption that the path to economic happiness is paved with what writer George Monbiot described in The Guardian as “tax cuts for the rich, the crushing of trade unions, deregulation, privatization, outsourcing and competition in public services.”

And, of course, balanced budgets, the sine qua non that will lead us, we are told, inexorably and inevitably, to trickle-down prosperity for all…

And where has all that really gotten us? Not there. That’s for sure.

In theory, this election could have been an ideal opportunity to debate the kind of society we want for the future. That’s because, for perhaps the first time in 20 years, one political party appears to be offering an alternative to more of the same.

While Stephen McNeil personifies the neoliberal world view and Jamie Baillie offers a kinder, gentler version of the same-old-socks, new NDP leader Gary Burrill is clearly cut from a different cloth, not only from McNeil and Baillie but also from recent provincial and federal NDP leaders.

The difference is not just in his continuing, preacher-like reminders of our society’s growing acceptance of food banks, or even in his willingness to embrace deficits as at least a medium-term economic strategy. (That, in fact, is no longer all that new or unorthodox; Liberal Justin Trudeau, you may recall, won a recent federal election on a similar deficits-are-ok promise.)

But Burrill and his NDP platform seem to envision a much more hands-on, proactive role for government to help us achieve that better, more prosperous society we all say we want.

While the argument that government should have a place — even the dominant place — at the public policy table may seem radical, even heretical, today, the reality is that that was politics as usual in Canada until the 1980s… until Reagan, Thatcher, Mulroney, et al. And look where that’s got us!

The problem may be that the NDP hasn’t done an especially good job of articulating that philosophical difference in this campaign in a way that voters can understand, or support.

In part, that could be because the party is still weighed down by lingering anger after its first kick at the governing can when it tried to be both different from and the same as the governments that went before — and ended up satisfying no one.

Voters may still not be in a mood to listen to anything the party has to say.

At the same time, of course, Gary Burrill is still introducing himself to the electorate. For many voters, last week’s leaders debate was a first opportunity to see him in action, suggesting it may have been a mistake for Burrill not to run for a seat in last year’s Needham by-election.)

Perhaps most importantly, the NDP’s election campaign itself has focused mostly on hanging out the party’s laundry list of specific first-term spending promises and defending itself against attacks its policies would — heaven forbid — lead to deficit spending.

The result is that the NDP hasn’t really explained how and why its policies could lead to a better province for all. Too bad.

Maybe it is true. Election campaigns are no place to discuss serious issues.

But if not then, when?