Wednesday’s historic agreement between the City of Halifax and the former residents of Africville, which was intended to turn the page on their bitter 40-year dispute, did not please everyone. How could it? The old wounds run too deep; the new hurts remain too raw.

Make no mistake. There are legitimate questions to ask about what is—and isn’t—in this deal.

Should the former residents have received individual compensation, for example, for what the city now acknowledges was a mistake that “disrupted” their lives and whose “repercussions [continue to] haunt us in the form of lost opportunities for young people”?

Should there be a public inquiry that could explore and expose what really happened? And why?

And there are other issues. Will the Seaview Baptist Church be rebuilt on its former location or, as some fear, on the edge of what is now called Seaview Park? On the outside again. Looking in.

Will the promised “African Nova Scotian Affairs function” within HRM be a genuine effort to improve the lot of black Haligonians? Or yet another game of smoke and mirrors?

Those are reasonable questions. They need to be asked and answered.

Today, it is worth pausing briefly to savour the historic and profound nature of what actually happened this week in a basement gymnasium at the north end Community Y.

The City of Halifax, on behalf of all of us, said it was sorry. 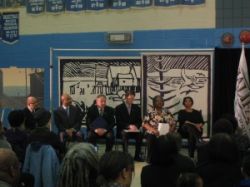 As Mayor Peter Kelly explained to the hundreds of people gathered in the gym, many of them former Africville residents and their children: “You need someone from government to stand before you, to look you in the eyes and to say from the bottom of our hearts, ‘We are sorry.’”

This was not a weasel apology, not a we’re-sorry-if-we-hurt-your-feelings non apology. Nor was it an explanation-apology, one of those, those-were-different-time-and-we-meant-well-and-we’re-sort-of-sorry faux apologies.

In the course of 309 words over three minutes and 14 seconds, Mayor Peter Kelly used the word “apologize” seven times. He also said “we are profoundly sorry” and “we ask your forgiveness.”

While not glossing over the past, he made the point that, while “history can not be rewritten… the future is a blank page and, starting today, we hold the pen with which we can write a shared tomorrow.”

After last weekend’s Hants County cross-burning and this week’s city hall protest by municipal employees protesting racism in the workplace, a blank page would be nice.