So what’s an un-built McMansion really worth? $119 million? 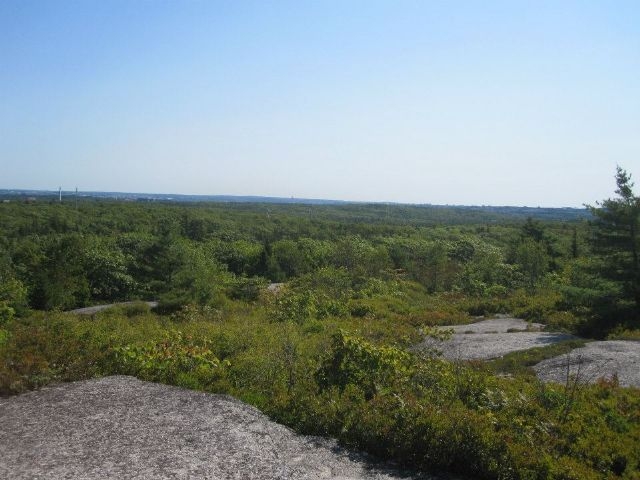 That’s how much the Annapolis Group says the city owes it for refusing to bow down to its dream to pave over parts of the Blue Mountain Birch Cove wilderness area for what critics have described as “McMansions and McCondos.”

Last week, the company gave notice it will file a lawsuit against Halifax Regional Municipality, claiming the city abused its authority, acted in bad faith and “unjustly enriched [itself] at the expense of Annapolis” by “effectively” expropriating 965 acres the company owns in an area the city plans to develop as an urban wilderness park.

That, the company declared in a press release, is the amount “a professional evaluator” claims its land is worth.

We’ll come back to that.

According to a city staff report, Halifax has been considering turning the untamed 4,000-acres of “natural forest, lakes, streams and bogs” between the Bayers Lake Industrial Park and Hammonds Plains into a public wilderness park since at least 1971. That’s when the Metro Area Planning Committee (MAPC) “identifies Birch Cove Lakes as an area of interest for future Regional Park and Open Space.” According to the Ecology Action Centre, this area — two-thirds the size of the Halifax peninsula — has long been considered an “important linchpin area, ecologically speaking.”

In 2006, the city approved the Halifax Regional Plan, which called for the creation of a regional park around the Birch Cove Lakes and Blue Mountain area on then still-undeveloped land owned by a number of private landowners, as well as the provincial government. To facilitate development of the new park, the provincial government designated its land as “protected wilderness” in 2009.

Annapolis, which says it started working to develop its lands commercially in 2007 — a year after the regional plan was approved — began pressing the city for what is known as a secondary planning strategy to allow it to turn its property into subdivided suburbia.

In 2014, the city, Annapolis and another private landowner agreed to appoint Judge Heather Robertson as a “facilitator” to help determine acceptable boundaries for the park. Robertson’s eventual report was so abysmally unbalanced it could have been written in the developers’ boardroom.

Instead of suggesting a boundary, complained Bob McDonald, chair of the Halifax North West Trails Association, Robertson delivered “a development proposal… on behalf of the landowners/developers,” including permitting private shoreline development on Fox and Susie lakes in the middle of the park while blessing the developer’s scheme to sell another tract of parkland to the city for twice what staff believe it’s worth.”

Last September, city council effectively rejected that report, opting instead — by a vote to 15 to 1 — to endorse a staff report recommending no commercial developments for the area.

Which inevitably led to last week’s lawsuit. Rob Gillis, the vice chair of Annapolis Group, explained its basis thusly: “Since HRM is not going to allow us to develop our lands, we are simply asking to receive fair compensation from the municipality for the lands that have been effectively expropriated.”

But is $119 million for an undeveloped chunk of un-serviced land in the middle of an area already designated as a public wilderness park really fair market value?

According to a CBC report from last year, Annapolis had offered to sell the city 210 acres of those holdings for $6 million. That’s more than twice as much as the city’s own appraisers thought it was worth.

But OK, let’s run with the company’s own numbers for a bit. The company’s offer — likely just an opening, top-dollar negotiating gambit from which it fully expected to climb down — works out to about $28,500 per acre.

Extrapolating that to the company’s full 965 acres, we end up with a total price of $27.5 million. Even if the land the company was originally trying to sell was designated un-developable “urban reserve” while the rest is technically zoned “urban settlement,” that is still a long, long, long way from the company’s claim of $119 million.

As my colleague Tim Bousquet put it so well last summer, money is…

“what this all boils down to. I don’t think the Annapolis Group is hell-bent on developing the property, but there’s no question that they want top dollar for it. So the developers have been pushing to get the land valued at suburban development land prices as opposed to non-developable green space prices. Robertson’s report played right into their hands.”

You probably won’t be surprised to learn Annapolis invoked Robertson’s report —  the city, it said, “ignored the facilitator’s report and refused to allow Annapolis to proceed with its proposed development” — in its own press release.

And — inevitably as well — the company tried to portray its own self-interests as the public interest. “By treating businesses unfairly,” Gillis argued, “HRM is jeopardizing future investments in the region, economic prosperity and jobs. The municipality should focus on higher priorities such as jobs, tax revenue, services, and infrastructure.”

No. The municipality should not cave to developer threats or fear-mongering. It should simply expropriate all of Annapolis’s land within the park boundaries, offering it fair market value for its long-ago speculative purchase of undeveloped, un-serviced land in what will now be a public wilderness park. Not a penny less. But not a penny more.

And certainly not $119 million.