Stephen Kimber > Freelance > The Coast > Rebuttal to the chief 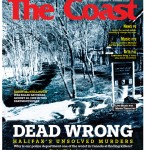