You showed them, Mr. Mayor

Congratulations. You showed those dangerous… democrats.

Who knows what calamities might have befallen our fair city if those peaceful hooligans had been allowed to stage yet another one of their interminable, speak-and-repeat, consensus-decision-making general assemblies on our sacredly public Grand Parade (which, until recently, served as a sacredly private parking lot for you and your fellow councillors, but, hey, that’s another story…)?

Those hippies could certainly take a lesson from you on doing democratic decision making right. In-camera, mumble, mumble, secret handshake, consensus achieved, call in the cops, Chinese wall, operational decision, nothing to do with us, move along, move along…

And that bargaining in bad faith thing you did with them? Inviting them to camp out at the Common to get them away from your office and then, zap! No Victoria Park, no Grand Parade, no Common. Nyah, nyah…

I mean, really, if they wanted to flout the law, they should have have done it in style—shredding the city charter and costing taxpayers hundreds of thousands of dollars like you did with that Common concert cash thingee. Now, that was flair!

The fact is, if you’re going to inconvenience the public, do it right. Forcing people to wander among tents and tenters to get where they’re going? No imagination. Close down the heart of the Common for a couple of weeks to put up a sound stage for some rockers no one pays to see. Now that takes guts.

So what if their tent city was less violent than the Palace on an average Friday night? That’s not the point. The point is you showed them the point. 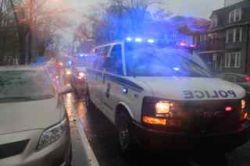 Personally, I thought the police—dozens and dozens of them, with their South Park Street-filling, light-flashing, murder-and-mayhem paddy wagons, patrol cars, motorcycles and tent-toting trailers and vans—showed remarkable restraint for having had to brave the elements on statutory holiday overtime pay. What is that? Double time? Double time and a half?

I agree. We have to be willing to pay a price for democracy, and it was vital the dismantling be done on Remembrance Day in the torrential rain and wind and mud so the public would be able to see for themselves exactly what those hippies had done to our parks. They’ll remember.

Mr. Mayor, you showed them what your democracy looks like. Congratulations!